William S. Phillips has had a fascination with aviation for as long as he can remember. His career in aviation art began in 1968, and since that time he has traveled the world documenting the history of aviation. His original paintings hang in museums and public and private collections throughout the world. Published by the Greenwich Workshop with over 95 prints, Phillips is also a member of the Air Force, NASA, and Navy Art Programs. He has had numerous one-man shows, including the Smithsonian's National Aviation and Space Museum, Naval Aviation Museum, and Airmen Memorial Museum.  ...more

After one of his paintings was presented to King Hussein of Jordan, Phillips was commissioned by the Royal Jordanian Air Force to create sixteen major paintings, many of which now hang in the Royal Jordanian Air Force Museum in Amman. The Smithsonian Institution’s National Air and Space Museum presented a one-man show of Phillips’ work in 1986; he is one of only a few artists to have been so honored.

In 1988, Phillips was chosen to be a U.S. Navy combat artist. For his outstanding work, the artist was awarded the Navy’s Meritorious Public Service Award and the Air Force Sergeants Association’s Americanism Medal. At least one of Phillips’ works was chosen in the top 100 each time he entered “Art for the Parks,” the prestigious annual fund-raiser for the National Park Service, and he received the Art History Award from the National Park Foundation several times.

He was chosen by the U.S. Postal Service to complete a full sheet of stamps on Classic American Aviation. This was the second best selling stamp of 1997. Phillips has received many awards including the Naval Museum Foundation's R.G. Smith Award and the Art History Award for the Art in the Parks competition.

September 11, 2001, hit Phillips very hard emotionally. Out of his distress came the painting A Prayer for My Brother. Fine art prints of this piece have been placed in many fire departments across the country, with a portion of the proceeds going to help families of fallen firefighters.

In 2004, he was chosen by the National Park Service to be the first Artist in Residence at the Grand Canyon where his assignment included paintings to interpret the park’s purpose as a place of pleasure and its importance as a national treasure.

He is regularly invited to participate in the annual Masters of the American West Exhibition and Sale at the Autry National Center in Los Angeles, an invitational for the top artists in the US. Bill is currently working on a large project documenting the Los Angeles Fire Department which will be placed in their museum. In October, 2013, the artist was inducted into the Oregon Aviation Hall of Honor, along with Doolittle Raider co-pilot Robert Emmens.

He is an Artist Fellow of the American Society of Aviation Artists.

Thunder in the Canyon

Home is the Hunter 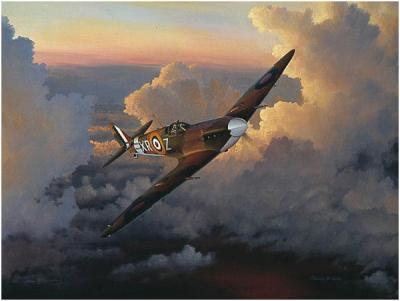 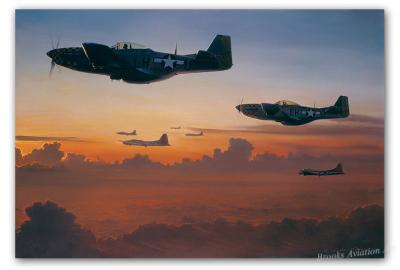 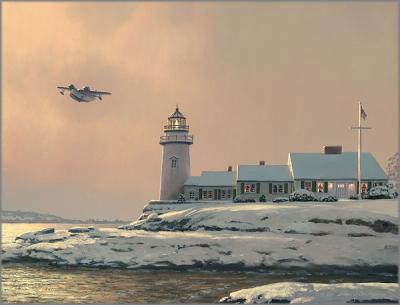