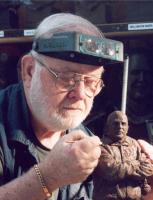 Nestled among the live oaks near the small Texas Hill Country community of Boerne stands a converted cattle barn, the studio of Jerry McKenna. Born in Connellsville, PA, McKenna has lived in Texas for over forty years. He is proud of his Pennsylvania roots but says, "I have traveled the world over and I have yet to find a more perfect place to work. It offers beauty, peace, and sunshine for most of the year." He has the distinction of holding both U.S. and Irish citizenship and he spends part of each year in Ireland.

A former Air Force officer and decorated Vietnam veteran, his early recognition came from his bronze portraits of famous Air Force leaders such as Generals Billy Mitchell, Ira C. Eaker, and Jimmy Doolittle. His work can be found in museums, parks, churches, public buildings, universities, halls of fame, and private collections around the world. In 1987, McKenna was chosen to create the Processional Cross for the mass celebrated by Pope John Paul II in San Antonio. ...more

Over the years he has received many awards, such as the University of Notre Dame's 1962 Emil Jacques Medal of Fine Arts and the 2001 Rev. Anthony J. Lauck Award.

Mr. McKenna was named the 2003 Sports Sculptor of the Year by the All-American Football Foundation in recognition of his seventeen portrait busts in the Pro Hall of Fame, his sculpture of Knute Rockne at the College Football Hall of Fame, sculptures of Charles A. Comiskey at U. S. Cellular Field in Chicago, Frank Leahy and Moose Krause at Notre Dame Stadium, Elroy "Crazylegs" Hirsch for the University of Wisconsin, and many others. In 2001, Mr. McKenna was awarded an Honorary ND Monogram by the Notre Dame National Monogram Club.In September 2014, the NCAA listed two of his works as the Best Sculptures in College Football: the Ara Parseghian came in at No. 5 and The Four Horsemen was No. 1.

Mr. McKenna began his formal study of art at the age of fourteen at the Gertrude Herbert School of Art in Augusta, Georgia. Later, he continued his studies at the American Academy of Art in Chicago and at the San Antonio Art Institute. He received Bachelor of Fine Arts degree from the University of Notre Dame, where he studied under Robert Leader and Dr. Stanley Sasha Sessler, and was influenced by the sculptor-in-residence, Ivan Mestrovic. He also received a Master of Arts from Webster University in 1981.

In addition to sculpture, McKenna’s other interests include reading, genealogy, Irish history, Notre Dame football, photography, spirited conversation·and an occasional fine cigar. He is an Artist-Fellow of the American Society of Aviation Artists and a Member of the Coppini Academy of Fine Arts. Married to Gail Thomas McKenna, an author and lecturer, he has five grown children (Colleen, Michael, Patrick, Sean, and Daniel), and eight grandchildren. 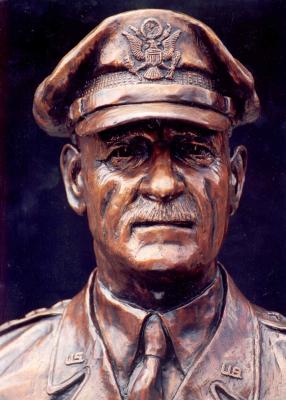 General of the Air Force
Carl A. "Tooey" Spaatz

General Spaatz was an aviation pioneer and the Allied Air Commander of the European Theater of Operations during World War II. 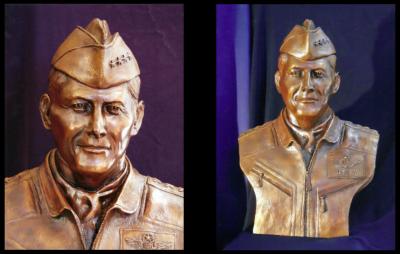 General Thomas M. Ryan, Jr. is a retired U.S. Air Force four-star general who served as commander of both the Air Training Command (1981-83) and the Military Airlift Command (1983-85). He was born in Detroit and was raised in Ridgewood, New Jersey. He received a BS from the University of Omaha and an MS from George Washington University. Ryan is also a graduate of the Armed Force Staff College and Air War College. The General is a command Pilot with more than 8,000 flying hours. His military decorations include the Defense Distinguished Service Medal, the Air Force Distinguished Service Medal, the Legion of Merit, the Distinguished Flying Cross, the Bronze Star and the Air Medal with six Oak Leaf Clusters. He was promoted to four-star General August 1, 1985 and retired at that rank on September 30, 1985. He and his wife, Penny, reside in San Antonio, Texas.

This sculpture was created in 2011 on the occasion of General Ryan’s enshrinement into the Airlift/Tanker Walk of Fame at Scott Air Force Base, Illinois. 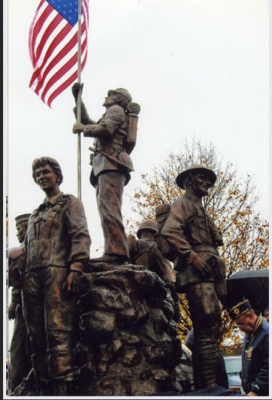 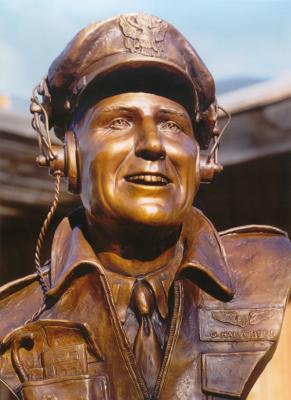 Gail Halvorsen was the legendary "Candy Bomber" of the 1948-49 Berlin Airlift (Operation VITTLES). He organized an effort to drop thousands of pounds of donated candy to the children of Berlin with "parachutes" fashioned from handkerchiefs.

This sculpture was created when Colonel Halvorsen was inducted into the Airlift/Tanker Hall of Fame in 1999. 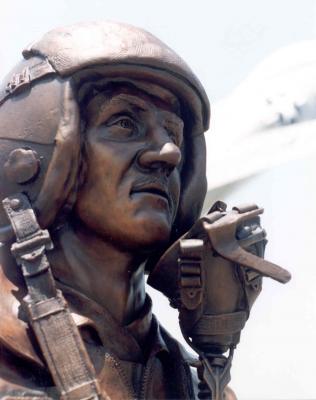 Major Ribas-Dominicci was killed in the 1986 bombing raid against Libya.

This life size sculpture stands at Laughlin Air Force Base in Del Rio, Texas. As a tribute to this fallen Hispanic hero, the sculpture was funded by contributions from both sides of the Texas-Mexico border—in Cuidad Acuna, Mexico and Del Rio, Texas. 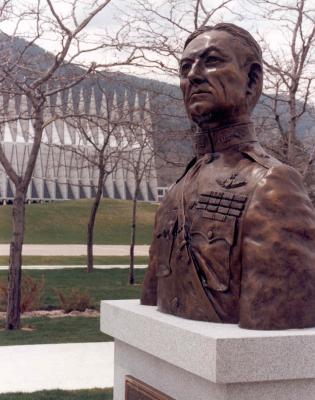 General Mitchell was a World War I hero and early advocate for airpower. He is most remembered for his court-martial for insubordination.

Although he was found guilty, the verdict was later overturned and he was posthumously promoted to Brigadier General and awarded a Congressional Gold Medal.

This sculpture was dedicated at the United States Air Force Academy in Colorado Springs, Colorado in 1989.